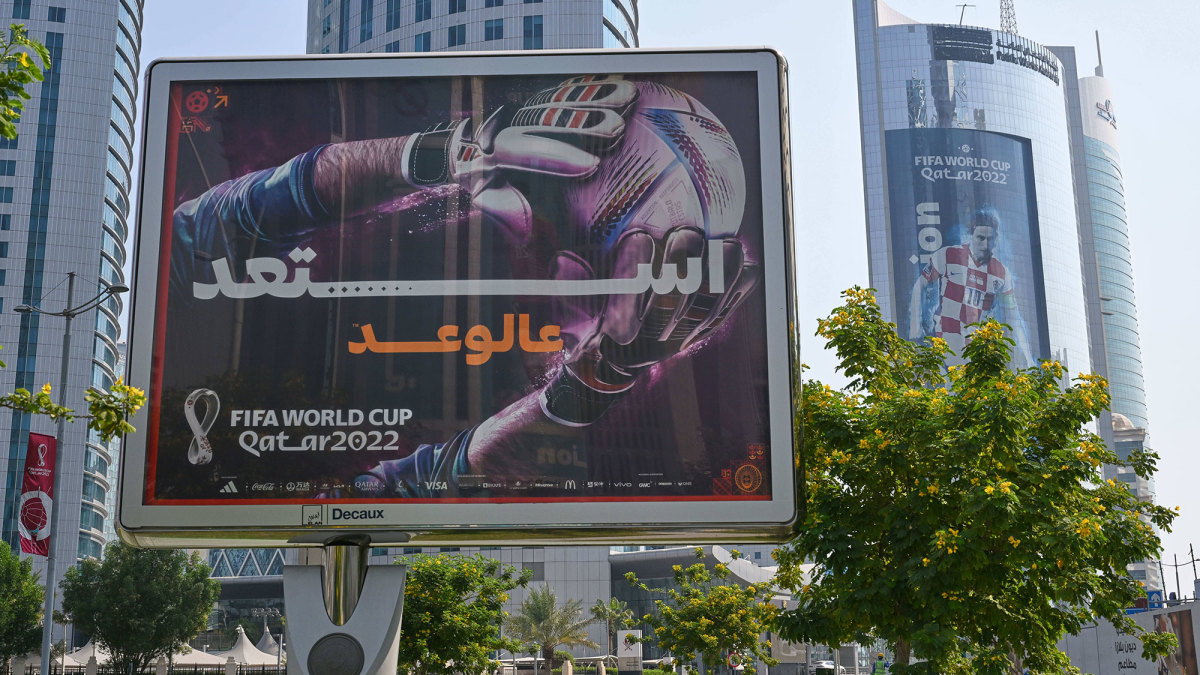 GENEVA (AP) — The first World Cup in the Middle East is a month away, nearing the conclusion of an often bumpy 12-year journey for Qatar that transformed the nation.

Qatar faced skepticism over how it persuaded FIFA to vote for the country in 2010; criticism of the way migrant workers have been treated in the construction of stadiums and tournament facilities; and the derision of the footballing world for changing the dates from the traditional period of June-July to November-December.

The tiny Arab country jutting into the Persian Gulf has overcome all of that, along with hostility from neighboring states that imposed a three-year economic and diplomatic boycott that ended in January 2021.

On November 20, football’s biggest tournament will finally kick off hours after sunset at the 60,000-seat Al Bayt Stadium, a new stadium north of Doha built for the World Cup. The host country’s maroon-and-white-clad national team will open a tournament that has come to define the image of the gas-rich emirate against the team from Ecuador – probably.

The 64 matches over 29 days involving 32 teams will take place in the Doha area, with many other shows and cultural events planned for a football-led party in the conservative Muslim society.

For a month, Qatar will relax its strict limits on where alcohol can be purchased, including serving beer from World Cup sponsor Budweiser at all eight stadiums and on the official big-screen viewing site of the Al Bidda Park.

Promises of “the best World Cup ever, on and off the pitch” were made on Monday by FIFA President Gianni Infantino, who said the same thing in Moscow four years ago when Russia hosted the tournament.

However, since the 2010 decisions to choose Russia and Qatar as future World Cup hosts, 21 of the 24 men on FIFA’s executive committee have been variously convicted in criminal or ethics cases, indicted, acquitted in a lawsuit or involved in wrongdoing.

Then-FIFA President Sepp Blatter is one of them, still banned from the sport he led for 17 years for various wrongdoings. Blatter, however, said he did not vote for Qatar.

Around 1.2 million visitors are expected in Qatar for the first World Cup to be played in the middle of the traditional European football season, a decision taken to avoid the oppressive desert heat in the Middle East.

“We are opening our doors to them in Doha without discrimination,” the Emir of Qatar, Sheikh Tamim bin Hamad Al Thani, told the UN General Assembly in New York last month.

There is, however, unprecedented late doubt, with the actual tournament schedule still on appeal. Chile and Peru have gone to the Court of Arbitration for Sport to challenge Ecuador’s qualification, claiming it used an ineligible player.

This year’s tournament will be one of the most expensive World Cups for fans to watch and certainly the most political of modern times. Currently, Brazilian players are being used as political weapons in an election campaign and Iranian players have supported protests at home after a 22-year-old woman died after being detained by vice police.

Eight of Europe’s 13 teams said last month that their captains would wear an armband with a multicolored heart-shaped design during matches in support of the ‘One Love’ campaign against discrimination.

The gesture is a clear violation of FIFA rules. It also reflects the unease inside the country at the prospect of hosting the biggest football event in Qatar, where homosexual acts are illegal and where labor and human rights are subject of controversy for a decade. Qatar points to changes to its labor laws in its defense and says LGTBQ fans will not be arrested.

This week, the US Soccer Federation joined six European federations in supporting calls by rights advocates to create a compensation fund for workers, many from South Asia, who have been killed or injured.

“As the World Cup approaches, the job of protecting migrant workers from exploitation is only half done, while the job of compensating those who have suffered abuse has only just begun,” said Steve Cockburn, Head of Economic and Social Justice at Amnesty International.

FIFA Deputy General Secretary Alasdair Bell said last week he was open to talks on remedies and reparations. It’s unclear if any money would come from FIFA’s $6 billion World Cup revenue; the Qatari government, which has reformed many labor laws faster than its regional rivals; or construction companies, which employed workers under physical and contractual conditions decried by activists as modern slavery.

Migrant workers have helped transform Doha into a futuristic city whose ambitions to rival regional hubs like Dubai and Singapore will be showcased by the World Cup.

“As you look across the country today, in the state-of-the-art stadiums, the training grounds, the subway, the wider infrastructure, everything is ready and everyone is welcome,” said Infantino, who left Zurich to live in Doha for the last year of preparation.

The infrastructure is there. The challenges for Qatar are on a human scale for a country of just 350,000 citizens in a population swelled to 2.6 million by migrants working in the construction, domestic and service sectors, as well as in labor jobs. white collar.

“The world will see that medium and small-sized countries are capable of hosting global events with great success,” the Emir told UN delegates.

As for security, Qatar will rely on the expertise and equipment of allies, including sniffer dogs, an anti-drone system and a surveillance plane from France, as well as a warship and police. Turkey riot. The US Army’s Central Command has its forward headquarters at Al Udeid Air Base.

This year’s World Cup will be staged in the smallest territory since Switzerland in 1954 and will uniquely unite most fans in one city.

Turkey is sending around 3,000 riot police for a tournament which – although usually attracting a wealthier type of fan than a stereotypical football hooligan – is expected to see boisterous Western-style exuberance on the streets of Doha.

A recent arrival in Doha was carrying 3 kilograms (6 pounds) of methamphetamine in a suitcase which was seized, Qatar Customs said this week.

A party scene is being created in Doha which will likely be a hub for ravers from the Gulf States, with ticket prices ranging from $45 to $7,500.

Near the main airport, the site of the 5,000-person Aravia festival is run by a Saudi music promoter, and the nearby 15,000-capacity Arcadia Spectacular brings a flavor of England’s legendary Glastonbury festival, including his giant fire-breathing spider metal stage.

This all adds up to the commitment that Qatari officials have made since 2009, when the welcoming campaign began: we love football like you do, come and enjoy it, but respect our cultural traditions.