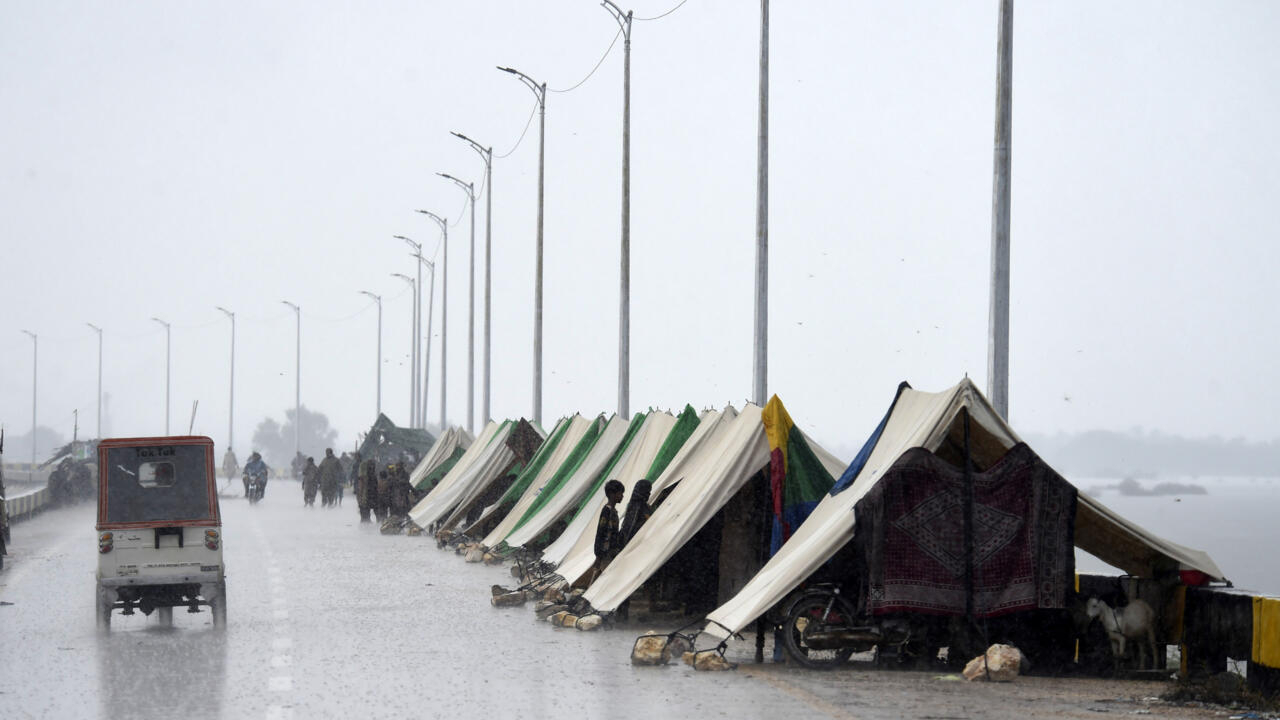 Sukkur (Pakistan) (AFP) – Pakistan’s flooded southern province of Sindh braced for another deluge of swollen rivers in the north on Sunday as the death toll from this year’s monsoon surged past 1,000.

The mighty Indus River that runs through Pakistan’s second most populous region is fed by dozens of mountainous tributaries to the north, but many have overflowed following record rains and melting glaciers.

Officials have warned that torrents of water are expected to reach Sindh in the coming days, adding to the misery of millions of people already affected by the floods.

“Right now the Indus is in full flood,” said Aziz Soomro, the supervisor of a dam that regulates the flow of the river near Sukkur.

The annual monsoon is essential to irrigate crops and fill lakes and dams across the Indian subcontinent, but it also brings destruction.

On Sunday, the country’s National Disaster Management Authority said the death toll from the monsoon rains had reached 1,033, with 119 killed in the past 24 hours.

He said this year’s floods are comparable to those of 2010 – the worst on record – when more than 2,000 people died and almost a fifth of the country was under water.

Thousands of people living near flooded rivers in northern Pakistan have been ordered to evacuate dangerous areas, but army helicopters and rescuers continue to bring stragglers to safety.

“People were told around three or four in the morning to evacuate their homes,” rescuer Umar Rafiq told AFP.

“When the floodwaters hit the area, we had to rescue children and women.”

Many rivers in the region – a scenic tourist destination of rugged mountains and valleys – overflowed, demolishing dozens of buildings, including a 150-room hotel that collapsed in a raging torrent.

Guesthouse owner Nasir Khan, whose business was badly hit by the 2010 floods, said he had lost everything.

“He took the remaining part of the hotel,” he told AFP.

Pakistan is eighth on the NGO Germanwatch’s Global Climate Risk Index, a list of countries deemed most vulnerable to extreme weather caused by climate change.

Worsening conditions, corruption, poor planning and disregard for local regulations mean that thousands of buildings have been erected in areas prone to seasonal flooding.

The government has declared a state of emergency and mobilized the military to deal with what Climate Change Minister Sherry Rehman called a “catastrophe of epic proportions”.

In parts of Sindh, the only dry lands are elevated roads and railway lines, along which tens of thousands of rural poor have taken refuge with their livestock.

Near Sukkur, a row of tents stretched for two kilometers, people still arriving in boats laden with wooden charpoy beds and pots and pans – the only possessions they could salvage.

“The water started to rise in the river since yesterday, flooding all the villages and forcing us to flee,” Wakeel Ahmed, a 22-year-old worker, told AFP.

Dam supervisor Soomro told AFP that each gate was opened to deal with a flow of more than 600,000 cubic meters per second.

The floods could not have come at a worse time for Pakistan, where the economy is in freefall and former prime minister Imran Khan was ousted in a parliamentary vote of no confidence in April.

While the capital Islamabad and the neighboring twin garrison town of Rawalpindi escaped the worst of the flooding, its effects are still being felt.

“Tomatoes, peas, onions and other vegetables are not available because of the floods,” he told AFP, adding that prices were also skyrocketing.