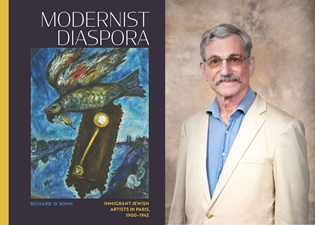 At the start of the 20th century, there was perhaps no greater source of creative vitality than the artistic communities at work in the city of Paris, France.

Among the deepest and most prolific were a cohort of young Jewish immigrants, who arrived with varying levels of training and in touch with their artistic traditions, but who created some of the most innovative and stunning examples of contemporary art.

Their experiences are the subject of Modernist Diaspora: Jewish Immigrant Artists in Paris, 1900-1945a new book by historian Richard Sonn.

Rich in examples of period art, Sonn reveals the essential role of intellectual and cultural exchanges between the city’s Jewish immigrant artists in creating the dynamism of Parisian modernism. Tracing the experiences of Jewish artists who traveled to Paris between the turn of the 20th century and the end of World War II, the author gives readers a close look at a unique cultural and social environment that was key of the work of a generation of artists who “produced the greatest artistic efflorescence in the long history of the Jewish people”.

At the heart of the book is the Left Bank district of Montparnasse, where Jewish painters and sculptors gathered amid the rising tide of anti-Semitism and nationalism in Europe. The works of great artists such as Marc Chagall, Amedeo Modigliani, Chaim Soutine and Sonia Delaunay-Terk were created here, made possible by Paris’ diverse and cosmopolitan society and the swirling artistic trends of the 20th century.

“The matrix of modernism granted immigrant artists the right to innovate freely and independently, while the artists’ colony allowed its inhabitants to live differently, in a way that challenged prevailing attitudes towards racism, anti-Semitism and militarism,” Sonn said.

The final chapter explains how these artists responded personally and artistically to the Holocaust, with the lucky ones finding exile in the United States and Switzerland, and others hiding in the south of France. More than a hundred were deported, of which only a handful returned to Paris.

Richard Sonn is a professor of history at the U of A, where he specializes in modern European and modern French history and is active in the university’s Jewish Studies program. His earlier work has focused on cultural and intellectual history in France, with a keen interest in the emerging modernist milieu of the late 19th and early 20th centuries. His previous books include Anarchism and Cultural Politics in Fin-de-Siècle Francepublished by University of Nebraska Press; Anarchism by Twayne Publishers; and Sex, Violence and the Avant-Garde: Anarchism in Interwar France by Penn State University Press.

About the University of Arkansas: As Arkansas’ flagship institution, the U of A offers an internationally competitive education in more than 200 academic programs. Founded in 1871, the U of A contributes more than $2.2 billion to the Arkansas economy through teaching new knowledge and skills, entrepreneurship and employment development, discovery through research and creative activity while providing training in professional disciplines. The Carnegie Foundation ranks the U of A among the few American colleges and universities with the highest level of research activity. US News and World Report ranks the U of A among the top public universities in the nation. Learn how the U of A is working to build a better world at Arkansas Research News.