The Santo Mauro in Madrid, a Luxury Collection hotel 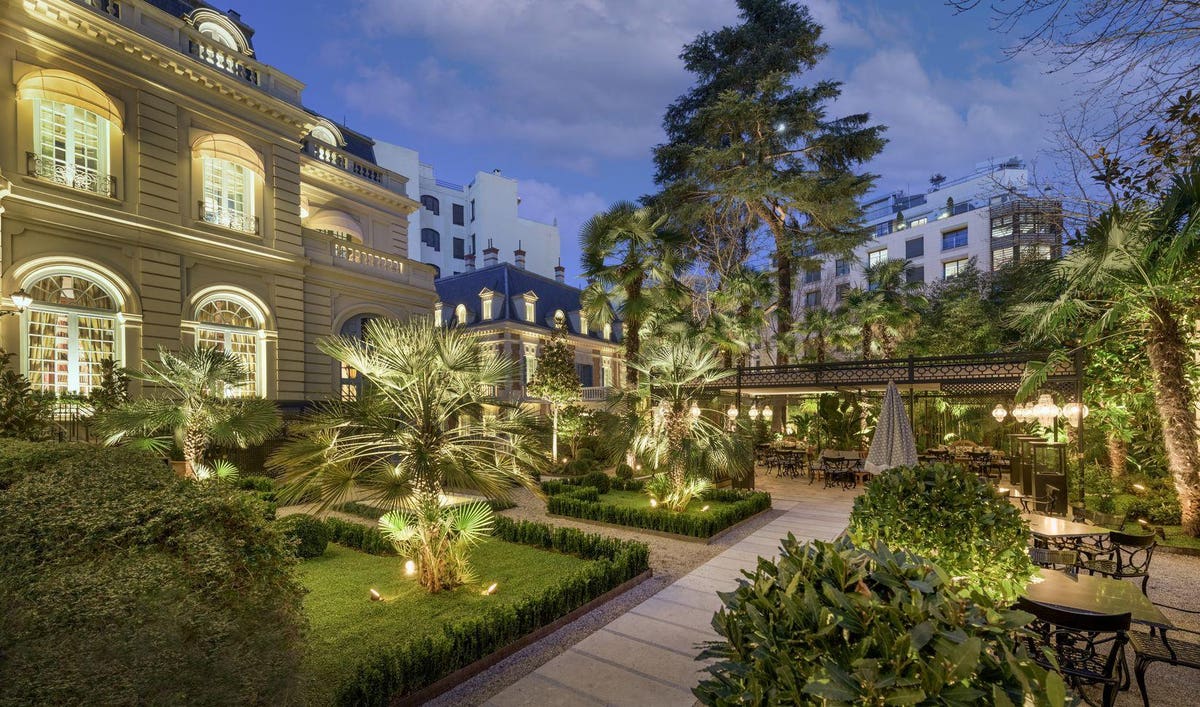 the dazzling Santo Mauro– who debuted last December as a flagship member of Marriott Internationalis famous Luxury collection— is the only hotel in Madrid housed in a real turn-of-the-century palace. Built in 1902 with a distinct French flair for the Duke of Santo Mauro – an influential and socialite politician – the singular hotel also served as an embassy in his past lives (the Swedish Embassy currently sits just across the from the street). Now, after an exuberant renovation, the genteel address in the city’s tony Chamberí quarter – a longtime leafy enclave for aristocratic madridians— attracts discerning travelers looking for a decidedly different stay in the heart of Spain’s bustling capital.

Renowned Spanish interior designer Lorenzo Castillo led the property’s latest transformation of three buildings (most recently it was part of Marriott’s autograph collection), giving it an opulent yet modern feel that pays homage to its historical legacy. The common areas evoke an 18e19th-century Spanish house, which often juxtaposed different design styles. In the gorgeous Chinese living room, toile wallpaper, ornate ebony cabinetry, and luxurious splashes of silver and pink create an elegantly soothing visual blend. Nearby, the breathtaking Red Room – awash in lush silks and velvets in bold patterns of garnet and Prussian blue, and accented with whimsical white moldings, Chinese ceramics and touches of greenery – offers a sumptuous shot of aesthetic fist.

Featuring tall beds with down pillow-top mattresses and Frette linens, the 49 rooms (including 10 suites) have been revamped in neutral earth tones with natural materials such as stone, marble and wood, while furnishings leather and velvet accentuate the hotel’s inherent elegance. Castillo’s visionary talents manifest with particular enthusiasm in the luxury suites; one features an enchanting tree of life motif, while another is covered in a soft teal wallpaper adorned with vases of flowers, with a matching bed crown lined in rich chocolate velvet.

Santo Mauro’s kitchen rises as high as the rarefied decor. Chef Rafael Peña, owner of the famous restaurant in Barcelona, Gresca—creates world-class tasting menus in the golden hue of La Biblioteca, the palace’s original library, lined with books and antique treasures from the private collection of the Duke of Santo Mauro. The Spanish ritual of late breakfast starts the day in a memorable way, thanks to warm but precise service, incredibly fresh orange juice and delicious dishes like an Iberian ham muffin with pulp from the popular Ramallet tomato Majorca, cultivated on the island since the 16e century.

Those looking to relax in style will want to head to El Jardin, the hotel’s achingly atmospheric garden, another rarity for a downtown hotel. Surrounded by centuries-old chestnut trees and teeming with artful landscaping, it’s a prime perch for sophisticated light snacks on the new outdoor terrace or for a neat private event beautifully lit by hanging lanterns. After dinner, the elegant El Bar, once the Duke’s billiard room, is an alluring spot for a craft cocktail.

Other unique touches set Santo Mauro apart from the flurry of recent notable hotel openings (Four Seasons, Mandarin Oriental, and Rosewood among them) in Madrid. The city’s first and only Luxury Collection hotel, it’s also the only hotel to have a soundtrack composer (Lucas Vidal, winner of a Goya award – Spain’s Oscar) as in-house musical director. Guests can take a colorful historical tour of the property and enjoy a daily “epicurean moment”: a Casilda cocktail — named after the Duchess of Santo Mauro — made with vodka, campari, and syrup from its centuries-old chestnut trees.

The hotel is also making its debut as Spain rebounds triumphantly from the downturn in pandemic travel. The country expects international tourist arrivals reach 80% of pre-pandemic volumes in the second quarter– largely thanks to a large number of Easter visitors last month – and is also one of the top 10 international destinations this summer, according to Virtuosoa global network of luxury travel advisors.

Madrid are busy preparing for their next star turn. The Paseo del Prado dating from around 1540 – arguably the city’s most iconic boulevard, recognized as the first tree-lined avenue of a European capital – and the nearby Buen Retiro Park, a verdant urban oasis comprising 15 000 trees, were added to the UNESCO World Heritage List last year.

Meanwhile, a complex two-and-a-half-year redesign of Plaza de España, one of Madrid’s most visited squares, was completed last November, diverting its once-notorious underground traffic and planting more than 1,200 trees in and around the square. Most notably, the renovation prioritized pedestrians and cyclists, creating green corridors linking public spaces including Plaza de Oriente, Sabatini Gardens and the Royal Palace.

For more information or to book, go to Santo Mauro website.