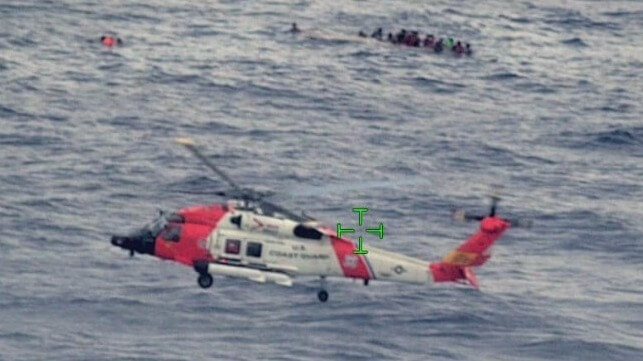 A migrant vessel capsized off Puerto Rico on Thursday, killing at least 11 people, according to the US Coast Guard. Nearly three dozen others were rescued.

Around 12 p.m. Thursday, a U.S. Customs and Border Protection crew located a suspected smuggling boat at a position in Mona Passage, about 10 nautical miles north of Desecheo Island. Some of the occupants of the boat were already in the water.

U.S. Coast Guard and Customs and Border Protection officers responded to the scene and pulled 31 survivors from the water, including 11 women and 20 men. The total number of people initially on board is not known, and the search for other survivors continued until Thursday evening.

“Our hope and prayers are with the survivors and those still missing. Our top priority is saving lives and that is what my crews will exhaust themselves doing. We are looking for survivors with every available asset” , said Rear Admiral Brendan C. McPherson. , commander of USCG District 7. “The sea is dangerous. These companies are dangerous.”

It was the second fatal crossing of the strait in a week. On Saturday evening, a Coast Guard patrol plane spotted a suspected smuggling boat in Mona Passage and guided Coast Guard Cutter Joseph Napier. The crew of the patrol plane could see the occupants of the makeshift boat emptying the water as they went. The Dominican Navy ship Aldebarán was the first on the scene and maneuvered to embark the migrants, but the small boat capsized in the process, putting dozens of people in the water. The crew of the Napier recovered the body of a woman and rescued 56 survivors from the water, and the Aldebarán rescued 12 more.

Crossing the Mona Passage is one of the busiest maritime migration routes to the United States. Between October and April, the US Coast Guard intercepted an average of about two attempts per week.