Erica R. Cramer
France traditions
Comments Off on Shows, magic and untold stories – The Thousand and One Nights

Shows, magic and untold stories – The Thousand and One Nights 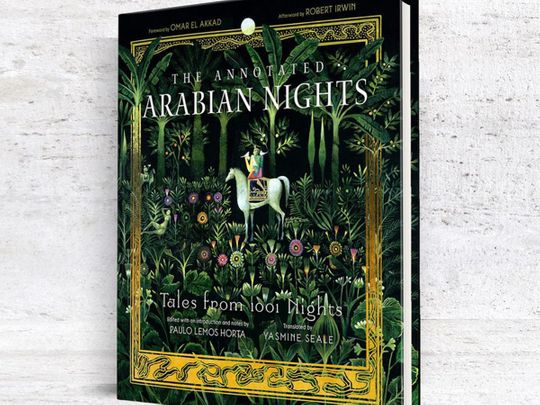 Shahryar, a powerful king learns of his wife’s love affair with a slave, promises to avenge him on all the women he will marry from now on. A night of conjugality, the next morning would turn to fate for the young bride succumbing to an untimely death engineered by their husband.

Enter Shahrazad, the vizier’s daughter, intelligent and brave determined to put an end to these murders. She comes up with a plan to tell a story every night for the next 1000 nights, leaving the king curious about the endings of those stories, consequently delaying Shahrazad’s death.

Here is a female storyteller who can tell stories like an endless silken carpet of spectacle, wonder and slapstick to form the basic adventure for the latest annotated, brilliantly illuminated “The Arabian Nights Annotated: Tales of the Arabian Nights” (WW Norton & Co).

Perhaps the greatest irony in the world of literature, The Thousand and One Nights had been reluctantly attributed to the British antiquarian Richard Burton and principally to another French translator Antoine Galland whose volumes of stories were published between 1704 and 1717. genius, erroneously designating him as the creator of One Thousand and One Nights.

However, the reality was far from what Europeans thought it was.

Without a single definitive manuscript in Arabic and without a defined author, The thousand and One Nights owes its roots to the rich folk traditions of the Arab lands, a storytelling culture originating from the cafes, markets and souks of cosmopolitan Cairo, Damascus, Aleppo pollinated by many springs imported from Persia and India.

Interestingly, the best-known tales like Aladdin or Alibaba and Forty Thieves or Prince Ahmed and Pari Banu have no records, thus emphasizing their storytelling qualities.

To this, the most acceptable ownership of these popular stories goes to a Syrian called Hanna Diyab, a professional storyteller from Aleppo in the early 1700s, who invented or recycled them and remained in complete anonymity for the 270 years. following.

In a crowded cafe somewhere on a busy street in Aleppo, Diyab was enthusiastically recounting a saga. The audience, mostly a mix of locals and travellers, lapped up everything, some attentive to what was to come, others languidly reclining in seats, absorbing every word of the young storyteller dressed in his local attire of a rod and dagger. baggy pants billowing as the air smelled of caffeine.

During one of these storytelling sessions, Diyab met a Frenchman named Paul Lucas, an archaeological treasure hunter exploring Arab lands, sent by King Louise XIV of France. The latter was desperately looking for an associate interpreter, who could team up with him.

Lucas offered Diyab a role as guide for the rest of his trip and in return he would get Diyab a coveted job at the Royal Library in Paris. The Syrian storyteller accepted what seemed like a lucrative offer, as they embarked on a long journey to reach Paris in the fall of 1708.

All of this and more was recorded in a memoir that Diyab wrote after returning from Paris to Aleppo at the end of the 18th century.

Life in Paris was an impatient wait for Diyab, hoping that Lucas will keep his promise. Soon, he will meet an old scholar named Antoine Galland. It was a Sunday in the summer of 1709. During subsequent sessions, Diyab had told Antoine15 amazing stories, including the story of Aladdin.

Hardly did the men sense how these spontaneous narrations would end up changing the dynamics of the world’s most popular literary work.

Galland was an old player; antique dealer to the royal court of France, scholar, librarian and traveler who had spent his time in Arab countries as well as in Constantinople. Luckily, when he met Diyab, he had exhausted his bank of stories after publishing 7 volumes, tiled like “One Thousand and One Nights” in French taken from the medieval Arabic manuscript ‘Alaf Layla Wa Layla’.

Galland began to prepare his next, appropriating what Diyab had described. Strange as it may seem, Galland only credited Hanna Diyab with a few sporadic mentions in her personal diary.

With the short stories One Thousand and One Nights annotated and translated titled “The Arabian Nights Annotated” published by WW Norton, some of those gaping gaps have been filled. Added to this is a fair and equitable contribution, shattering the myth of the French genius read European creator.

The current volume has been inspiringly translated by French Syrian poet, translator Yasmine Seale and brilliantly edited by scholar Paulo Lemos Horta has more than one good to point out.

Not only is it a retelling of the world’s most spectacular stories of wonder, dream, magic and reality wrapped in the most intimate translation, it is also a decolonized view of the Arabic roots of these stories, detaching it of its crushing burden of Europeanness. .

Commenting on the tone of the new volume, Paulo Lemos Horta, researcher and editor, professor at NYUAD (NYU Abu Dhabi) says: “The most widely available version of The Nights in English is that of Richard Burton, reprinted in the Modern Library Classics series, a fine Barnes and Noble edition, and countless other online and print editions. This 1885 version is laden with Burton’s own biases, which he freely intertwined and interpolated. My goal was really to go beyond the past versions burdened by the prejudices of the translators.

Bringing back Diyab’s signature, more nuanced and culturally intimate Arabic storytelling was an intention for the translator and editor.

Horta affirms “This is the reason for this new volume, to restore his tales, first published in French translation, among which, “Aladdin and the marvelous lamp”, “Ali Baba and the forty thieves”, “The prince Ahmad and the fairy”. Peri Banu”, “The Enchanted Horse” and “The Nocturnal Adventures of Harun al Rashid”.

Because of this mandate to publish Hanna Diyab’s tales alongside those of the original core, I sought out a translator who could translate with equal balance from French and Arabic, Yasmine Seale”.

For starters, Seale is an acclaimed Franco-Syrian poet and translator, the first woman to translate Nights. The other first credit to the volume is its inclusion of stories around female protagonists like Marjana, Pari Bano, and Parizaad, all smart and incisive women, previously shadowed by their male counterparts, thanks to the orientalist nature of earlier translations.

Horta and Seale reverse this. Seale also recovers the Persian name of the vizier’s daughter; Shahrazad, the narrator of the Nights instead of the widely used Scheherazade.

Horta notes: “And working with the same publisher who commissioned Emily Wilson’s Odyssey, the first English translation by a woman, I thought that Tales of Nights, more focused on women’s stories compared to men, could benefit even more from a first female English translator. ”

Through Seale’s sparkling, visually rich translation and Horta’s opulent annotations, one is exposed to a splendid storytelling grounded in the culture it hails from, minus its ethnographic lens.

Interestingly, this edition of One Thousand and One Nights shows how these stories continued to be amalgamated from his first snack in Baghdad during the time of the Abbasid Caliphate imbibing imprints of imagination, location in his journey while being shared and recycled many times in public places, cafes, markets in Aleppo, Damascus, Cairo until it landed on the other side of the Mediterranean in the uninformed imagination of the Western public.

This edition of ‘The Arabian Nights Annotated’, goes full circle.

Nilosree is an author and filmmaker