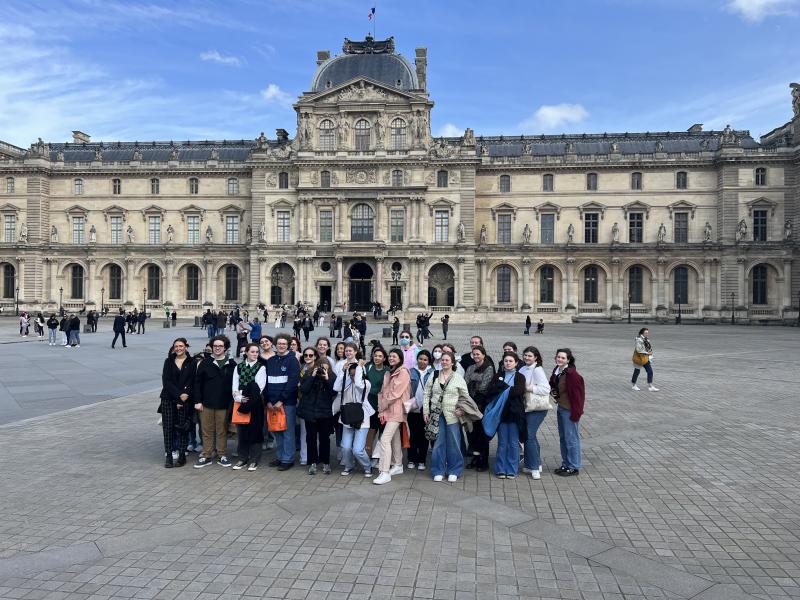 After three years, the annual Cape High Paris trip has seen a huge surge in travellers, with 39 students and eight adults making the first trip across the pond since before COVID, said French teacher Holly Criswell.

“They are ready to open up and welcome tourists,” Criswell said, noting that she was happy to see her familiar tour guide return to work for the first time since the pandemic began. “It was like seeing an old friend. We were so excited.

In 2005, Cape started a travel exchange program with a French sister school which ended in 2013. The current travel program started in 2017 and takes place every two years.

On the last trip in 2019, students were able to see Notre Dame less than a week before the fire destroyed its spire and part of its ceiling. This year’s visitors were able to see the cathedral being renovated.

Paris largely follows the same COVID rules as America, Criswell said, with mandatory masks on public transport. Some supply chain issues were evident, she said, as selections on store shelves were sometimes limited.

“He became like Christopher Columbus – a hero turned villain in France,” she said. “There are a lot of anti-Napoleon sentiments.”

In all, the students covered about six miles a day as they visited the grounds of the Royal Palace of the Middle Ages, La Sainte Chapelle, The Chocolate Museum, the Louvre, Versailles, Montmartre with the Basilica of the Sacred Heart, the Arc de Triomphe Museum, the Champs-Élysées, the Pompidou Center, the Eiffel Tower, the Fragonard Perfume Museum and the Opéra Garnier.

“We also took a cruise on the Seine to see the city from this perspective,” Criswell said.

Anna Fantoli, a third-year student from France, said she most enjoyed interacting with locals at cafes and learning about French culture.

“I didn’t think I was going to speak as much French as I did,” she said, noting that Parisians would help her communicate if they saw her struggling with the language.

Sophomore Zoey Friday, who is not a French student, said the Center Pompidou, which houses the National Museum of Modern Art, was her favorite destination. The French architecture and Versailles, although overwhelming with all its gold and paintings, were magnificent, she said.

Bailey Chzranowski said her favorite part of the trip was relaxing at the hotel with friends after walking around the city all day.

“The orange Fanta is to die for,” Sophia said. “It’s like pure orange juice carbonated and refreshing.”

The students enjoyed tasting French cheeses and baked goods and buying rings, handbags and natural soaps in the street markets.