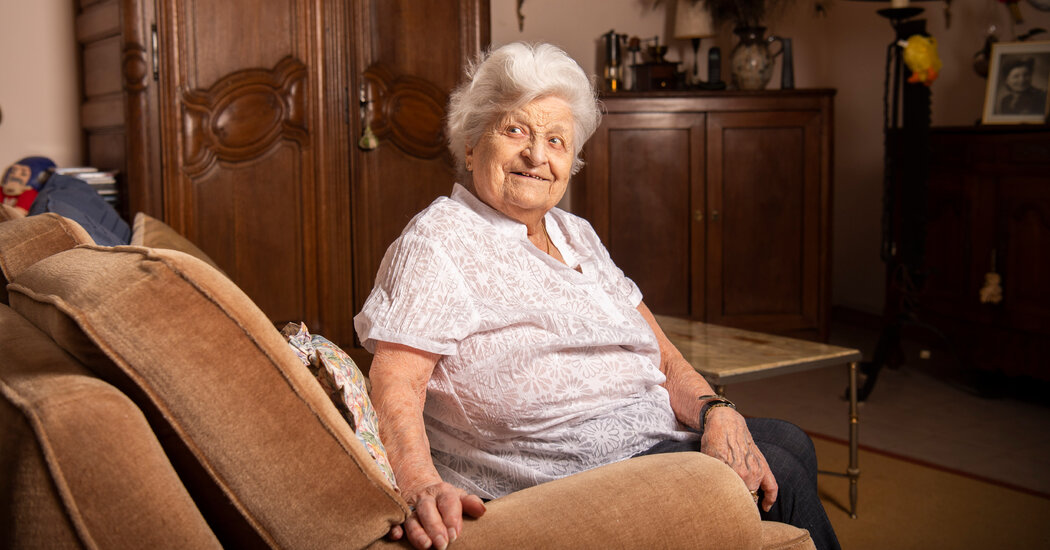 Monique Hanotte, who greeted border guards as friends as she smuggled around 140 Allied airmen out of German-occupied Belgium during World War II, died February 19 in Nivelles, Belgium. She was 101 years old.

The death, in hospital, was announcement by the government of Nivelles, where Madame Hanotte lived.

Ms. Hanotte was a particularly effective member of the Comet Line, a Belgian Resistance operation during the war that rounded up, sheltered, fed, disguised and released hundreds of Allied airmen who crashed in Belgium while flying missions. attack by German forces.

Comet agents directed the airmen on a path that led into France, then across the country to the Pyrenees, past the mountain range into Spain, through Spain and finally into the British territory of Gibraltar, whence they were transported to England.

Madame Hanotte was one of the last surviving Comet agents.

His career in the Civil Resistance began in May 1940, the same month that Germany invaded Belgium. Two British soldiers who had been sent to this theater of war arrived at the Hanotte family’s home begging for help crossing the French border.

The men were lucky. Ms. Hanotte’s father, Clovis, was a patriotic World War I veteran who, with the help of his wife, Georgette, ran a customs agency as well as a hotel and restaurant opposite the station in Rumes, a town Belgian bordering the French northwest. town of Bachy. The family dressed the officers as coal merchants and escorted them on foot to France.

Soon after, they had another visitor: an officer from MI9, the British war office responsible for helping POWs and downed airmen. Over coffee, he asked Mrs. Hanotte’s parents if they would agree to lend their daughter, then only 19 years old, to the war effort.

He chose well. Mrs. Hanotte had just finished her secondary studies in Bachy, crossing the border daily for her travels. She knew the border guards personally, some as friends, and she knew the hidden paths through the border hedgerows.

She became a member of a group of women, primarily Andrée de Jongh, who smuggled people and goods as part of the Belgian Resistance. Mme Hanotte was born Henriette, but now she had a code name: Monique. She will carry this name for the rest of her life.

His family accommodated one or two soldiers at a time in their hotel. Monique’s cousins ​​were working to forge official signatures on fake ID cards. His mother cooked for the soldiers; provided them with props, such as French or German press clippings; and ordered them to repeat their French pseudonyms until their pronunciation was convincing.

Monique’s job was to escort the airmen, named “parcels”. Sometimes she would simply hand them over to another officer across the border. Other missions called on him to guide them through Belgium, cycling under cover of the night after curfew, which was tantamount to risking death. She learned to lead her wards over 100 miles, all the way to Paris.

At the end of 1942, “we were full to bursting”, Mme Hanotte was cited as his obituary in the Times of London says. “We didn’t know where to put them, and my mother said to me: ‘Hurry up’. There were two leaving and two arriving.

Border guards informed Ms. Hanotte of the movements of German soldiers, and if she encountered any while trying to cross into France, she passed off her companions as new boyfriends.

Ms. Hanotte bought tickets for herself and the airmen at separate counters to avoid being associated with them. The airmen, at a distance, followed her movements—following her as she walked and presenting her with their identity cards when she did. She was carrying a loaf of bread to tell him a cover story about country shopping.

On one occasion, a German soldier in their train attempted to strike up a conversation with two disguised airmen. Mrs. Hanotte, concealing her fear, intervened several times and answered the soldier’s questions herself.

One day, in 1944, she arrived in Paris to find that the people from her hideout had disappeared. She will learn later that a Belgian collaborator has denounced her group. Ms Hanotte’s British dog handlers decided it was time for her to escape and she fled to Gibraltar, following the same route as her many airmen.

Martin Conway, a professor at Oxford University and an expert on Belgian wartime history, said in a telephone interview that the Comet network had been penetrated by double agents and Gestapo agents, leading to mass arrests.

Henriette Lucie Hanotte was born in Sepeaux, in north-central France, on August 10, 1920, and moved with her family to Rumes as a baby. His mother, Georgette (Lauret) Hanotte, was half-French.

Shortly after the war, Monique married Jules Thomé, a Belgian policeman who had been her fiancé from the start.

After the war, she worked in a Belgian hotel owned by the son of a former comrade in the Comet line. She is survived by two children, Bernadette Thomé-Renard and Bernard Thomé; six grandchildren; and many great-grandchildren.

After handing over her airmen to the next agent in the Comet line, Madame Hanotte often never heard from them again.

This was the case of HC Johnson of Tennessee, a technical sergeant whose B-17 was destroyed on November 5, 1943 by German fighter planes, depositing it with its silk parachute in a field of sugar beets around the Belgian town of Lokeren.

During his 54 days on the run, Sergeant Johnson relied on Ms Hanotte to guide him through the woods across the French border. They separated and he reached Gibraltar safely.

After the war, Mr Johnson ran movie theaters in Tennessee and had two children and three grandchildren. He died in 1984.

More than 70 years after Ms Hanotte served as his guide, in 2015 Mr Johnson’s sister, Sue Roark, and a niece, Anita Roark, traveled to Belgium to celebrate Ms Hanotte’s career in the Resistance.

When they met, Ms Hanotte and Sue Roark hugged. Then, while still close to this American stranger, Ms. Hanotte turned to her to make eye contact. Madame Hanotte’s smile faded.

She had a question to ask: “Did he go home?”