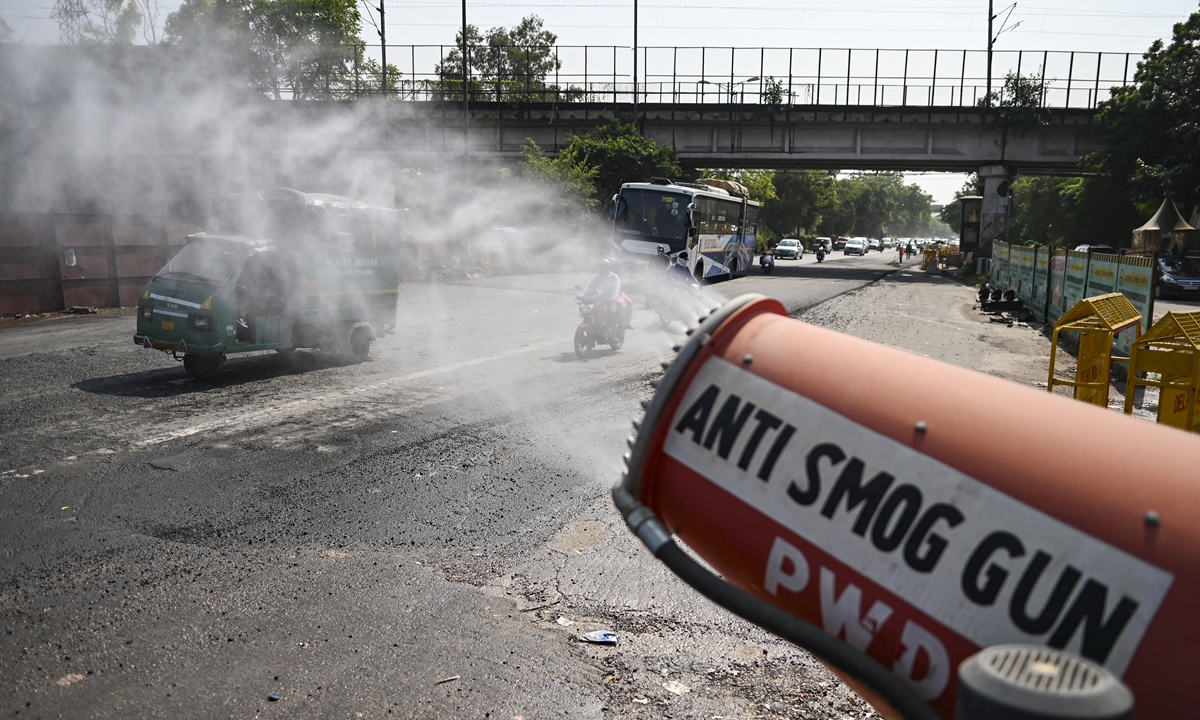 A smog gun works to reduce air pollution as vehicles hit a road in New Delhi, India on Monday. The Indian capital and its satellite cities accounted for half of the dozen most polluted cities in the world. Photo: AFP

When the Western powers present themselves as “leaders” in the fight against global warming, they must face the consequences of their colonial past: there is no justice for the environment without justice for history and human rights.

Hundreds of years ago, across continents, colonialists overexploited, polluted and deforested entire landscapes. They are gone, but the serious consequences of their disruptive exploitation remain a curse on the lives and prosperity of the local populations. In a blind pursuit of profit, the colonialists abandoned tried and true locally rooted agricultural traditions and replaced them with an arbitrary monoculture of cash crops for export. Today, the descendants of colonized peoples inhabit poorer lands that bear the scars of soil degradation, erosion and depletion, making them even more vulnerable to climate change. In the Caribbean islands, for example, the tree-denuded lands left by plantation economies have become ideal incubators for mosquitoes that carry malaria and yellow fever.

The gap between polluters and victims of environmental consequences does not disappear with the scourge of colonialism. Western countries like France, Germany, the UK and others often outsource the most carbon-intensive industries elsewhere, industrializing while exporting pollution to others. As a result, developing countries are fueling Western demand at their own expense. In addition, local populations are extremely vulnerable to human rights violations by almighty multinational corporations. The term â€œblood charcoalâ€ used in Colombia to refer to its coal supply to Germany stems from serious human rights violations and contract killings carried out by paramilitaries on behalf of international coal suppliers.

This is why caution is in order when Western governments and politicians boast of having adopted â€œsustainable and competitiveâ€ green policies at home, especially when many of these solutions again involve the displacement of indigenous populations from their homes. their lands. When a British politician has asked world leaders to “grow up” he should remember his own country’s historic and current damage to developing countries. It is a persistence of injustice to ask the former colonies to pay the heaviest price for a crisis disproportionately caused by the colonizers.

In fact, this vicious cycle of injustice may not be a dead end. The researchers proposed methods such as paying off the carbon debts of the poorest countries, as well as initiatives of various types of development projects and grants. However, the Achilles heel remains the real attitude of Western governments: whether or not they recognize the error of their colonial past and learn to value the lives and livelihoods of developing countries as much as they value theirs. .

At least the Western powers must “lower their eyes” and contemplate the social, economic and ecological struggles of developing countries arising from the injustices of the past. Unfortunately, given the shameful drug and vaccination gap between developed and developing countries revealed by the COVID-19 pandemic, they appear to have a long way to go.

The author is a commentator on international affairs, writing regularly for Global Times, CGTN, China Daily, etc. He can be contacted at [email protected]