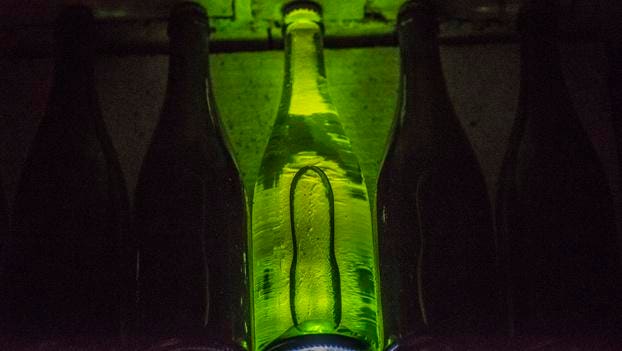 Nestled within the northern limits of viticulture capacity, in the famous region of Champagne, France, a young teenager is crushed to see how many grapes in his family have been wiped out by hail as it was the second hailstorm in two months. It was a difficult growing season – with frost in the spring initially killing some of the buds that would potentially turn into bunches of grapes, the cold weather lasted until June but suddenly became very hot with back-to-back storms. As a child the vines have always been a magical place and no other job on earth seemed to be so wonderful, but now, as I approach adulthood, the back-breaking work and feeling of helplessness as Mother Nature dictated. The future of the harvest made it an overwhelming job. that has had its moments of desperation. But for this young man there was no other way because unlike the great Champagne houses, which were the buyers of their grapes and had the image of a luxurious lifestyle with a global reach, the Family winemakers have had a simple farm life for generations which has been the only option for those born to producers.

This vintage ended up producing concentrated grapes due to the low yield as well as great freshness due to the long periods of cold and today it is marketed 50 years later by Piper heidsieck in a special edition called Hors-Série 1971 – only 2021 bottles available. This is the first offering in a new collection created by their chief winemaker, Émilien Boutillat, who succeeded in 2018 the award-winning winemaker Régis Camus, which focuses solely on the Piper-Heidsieck cuvée. A rare champagne, but Emilien is also the son of the Champagne winegrower who remembers the 1971 vintage as if it were yesterday.

One foot in the old, one in the new

At 36, Émilien Boutillat has already accomplished so much more than his father could have imagined. He left Champagne to go to university in the south of France to obtain two degrees, one in oenology and one in viticulture, then after university he worked at Château Margaux in Bordeaux and in the region of Châteauneuf- du-Pape before taking the plunge. to the rest of the world with time spent in New Zealand, California, Chile and South Africa; each experience gave him more knowledge which included various techniques in vineyards and cellars as well as learning various cultures and languages.

After his stay in South Africa, he decided to return to Champagne without any prospect, but he wanted time to understand where he ultimately wanted to build his career as a winemaker. After being out of a job in Champagne for a while, he was offered a job in Chile that would allow him to settle there as a head winemaker, but this downtime at home with his family, the place where he grew up, made him think that although it was a great opportunity, that he might regret letting go, that he wanted to return home permanently and try his luck in Champagne. He found himself working for a few Champagne houses and he even became cellar master of Champagne Cattier until October 2018, when he was offered the position of cellar master and cellar master at Piper-Heidsieck. . The Piper-Heidsieck team thought Emilien was the perfect fit as he has a deep respect for the traditions of champagne that pulsed in his blood, but he also has an open-minded approach backed by an enormous amount of different experiences that will make it possible for him to guide Piper-Heidsieck to the next level.

Piper-Heidsieck gave Emilien the freedom to explore the past and future of Champagne with a new collection he created called Hors-Série which is the French name used for a magazine’s special edition and wines from this collection will be extraordinary – each in their own unique way. The first offer from this collection is the 1971 vintage, 50 years old, which has aged on the lees (particles which precipitate during the second fermentation in the bottle giving more complexity and texture) for more than 49 years. As Emilien spoke to the Piper-Heidsieck team, he discovered that the 1971 was a vintage that could be placed very well now as it displayed vibrant and bright fruit notes in the past as they would taste the bottles in their cellar over the years. . And Emilien himself was shocked by the “freshness” of the wine when he tasted it for the first time and he therefore knew that this would be the ideal first offer to pay homage to the past, to honor the other winemakers who each had a role, the winemaker who made it and the two others who have tasted it over the years, both deciding to keep it until it is in its ideal state as well as all the winemakers who have put the grapes in this bottle during this difficult vintage.

Emilien personally contributed to the wine by choosing a 2019 Chardonnay that has not undergone a malolactic conversion from sour acid to milder lactic acid to top each bottle after losing wine once the lees have been extracted during disgorging. But his slight modern adjustment as the current winemaker is another nod to the past as the rule for Piper-Heidsieck in the 1970s was to only make wines that blocked the malolatic compared to today certain batches. being allowed to go through the conversion while others does not depend on what will give that particular batch the balance of wine.

The Hors-Série collection will not only publish vintages, but it will publish wines considered unique in some respects and which can showcase recent blends with more sophisticated wine-making choices, or show how they are combating climate change with rising prices. temperatures, in future versions. Emilien notes that the Hors-Série collection is for him “a wild card” and that he has carte blanche to do with it what he wants as long as he respects the characteristics and the style that are important to Piper-Heidsieck.

When Emilien is asked if he ever thought that he would eventually come back to Champagne and become cellar master for a Champagne house, he replies that he could never have imagined that since it was really about take it step by step, just feeling lucky to have had opportunities that her father and previous generations had not had in the past. He could just as easily have ended up on the other side of the world and helped shape a completely different wine region. But in this moment of rest and reflection, when he returned to Champagne after having worked all over the world, he knew he had to stay a bit to see if it was possible for him to become head winegrower for a house of Champagne, something he couldn’t imagine when he was younger. But today he is not only the chief winemaker and cellar master of one of the greatest Champagne houses, but he is leading them into the future – the son of a winemaker who, there all these years, seemed limited in his life choices and what he could offer. for the future of his children.

The packaging is just as unique as what’s inside the 1971 Hors-Série bottle as the label is traditionally styled, but the cap on the top has colors reminiscent of the 1970s era when it was styled. there was a lot of experimentation and exploration of off the beaten track thinking happening around the world. Each gift box is made from 100% oak and therefore the colors and grain are different for each of them and Emilien notes that even though the 1971 was blended and bottled at the same time, kept in the same place and ultimately disgorged at the same time, each bottle has subtle differences as the long aging time brings out different nuances with each bottle and therefore, such a gift box is suitable. But it also ensures that each bottle has been checked to make sure it is not oxidized prior to release as the ones that were found to be faulty were scrapped.

Piper-Heidsieck, Special 1971: 50% Pinot Noir and 50% Chardonnay from 12 different vineyards of 12 different Crus in Champagne, mainly from the Grand Cru and Premier Cru vineyards of the Montagne de Reims and Côte des Blancs de Champagne sub-regions. Aromas of citrus blossoms with dried white flowers and flavors of lemon custard mixed with fresh lemon zest, brioche, nutmeg notes and an underlying note of chalky minerality with a creamy texture and fine bubbles that have a lot of vitality and energy on the long finish. Disgorged in February 2021 with only 2,021 bottles on the market, each individually numbered; suggested retail price: $ 499.