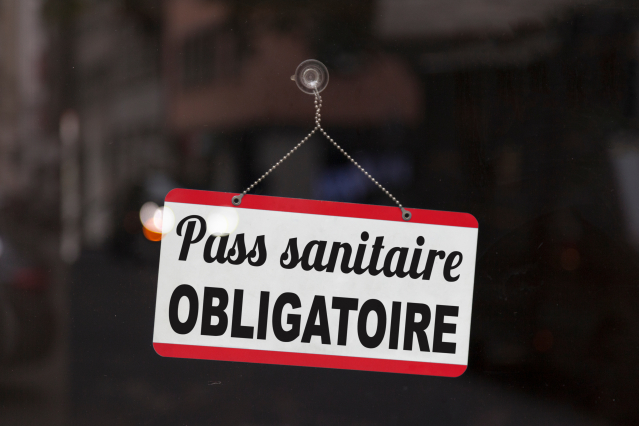 This comes after a one-week â€œlearning periodâ€ for staff and clients to get used to the rules.

As of Monday, August 16, police themselves can scan health cards and perform identity checks on customers to make sure they don’t present fraudulent cards.

People without a health card will be asked to leave the enclosure they are trying to enter and will be subject to a fine of â‚¬ 135. This amounts to â‚¬ 1,500 for repeat offenders.

The owners of establishments which do not control the health cards are exposed to a 9,000 â‚¬ fine and administrative closure, and to one year in prison for repeat offenders.

Film buffs were surprised to be greeted by police near Dijon on Monday evening (August 16).

â€œI didn’t expect to see them at the gates. I was a little surprised and wondered why they were there, â€one of them told France Info.

Customers at a nearby restaurant were also surprised at first. â€œAt first I thought something was wrong, then I realized they were there to check the health cards,â€ one said.

Restaurant manager Christophe Petit told France Info his restaurant has already been subject to informal checks since the introduction of health passport rules, but Monday night was the first time that identity checks were carried out. .

He said the restaurant would not risk breaking the rules. “We have respected the rules in place since the start of the health crisis,” he said. â€œWe apply them as we are told. “

Server hit by customers who did not accept new checks

Some restaurants have had more difficulty enforcing the rules.

In Saintes, in Charente-Maritime, a customer crashed into a server who asked for his pass on August 9.

The waiter, Mathias Coutant, 28, said the customer was a regular. He tells Sud Ouest: â€œHe told me he had the paper in his pocket, and I asked him to show it to me.

â€œI learned to be calm in all situations, but he wanted to make it a show. I turned around and realized he was getting up from his chair.

Mr. Coutant did not file a complaint against the client.

The manager of the restaurant, Olivier Domaine, is worried about the application of the rules now that the tolerance period is coming to an end.

â€œPeople have had enough and they pick on the person in front of them. We need an extra person who just checks the health cards, but we can’t do it, â€he said. Restaurants are turning to take-out.

In Auron, in the Alpes-Maritimes, a restaurant has found a way to bypass the rules completely.

The manager of Au Refuge told Nice Matin that he bought ten camping tables – which he calls “anti-pass tables” – so that customers can sit nearby.

He says: â€œThe idea came to me last winter when we were closed except for take-out.

â€œAnyone who doesn’t have a QR code can get one of our take-out meals and eat a little further away or even have a picnic in the countryside.

Meanwhile, a pizzeria in HÃ©rault completely stopped letting customers in after it reopened in July.

â€œWe decided to stop when the pass was introduced,â€ the owner of the restaurant near Valras-Plage told France Bleu, which now only offers take-out.

The owner said: “[checking the pass] goes against my ideas. I refuse to be part of a permanent people control system. It is impossible to manage.

Why are there more anti-Covid protesters in Toulon than in Paris?