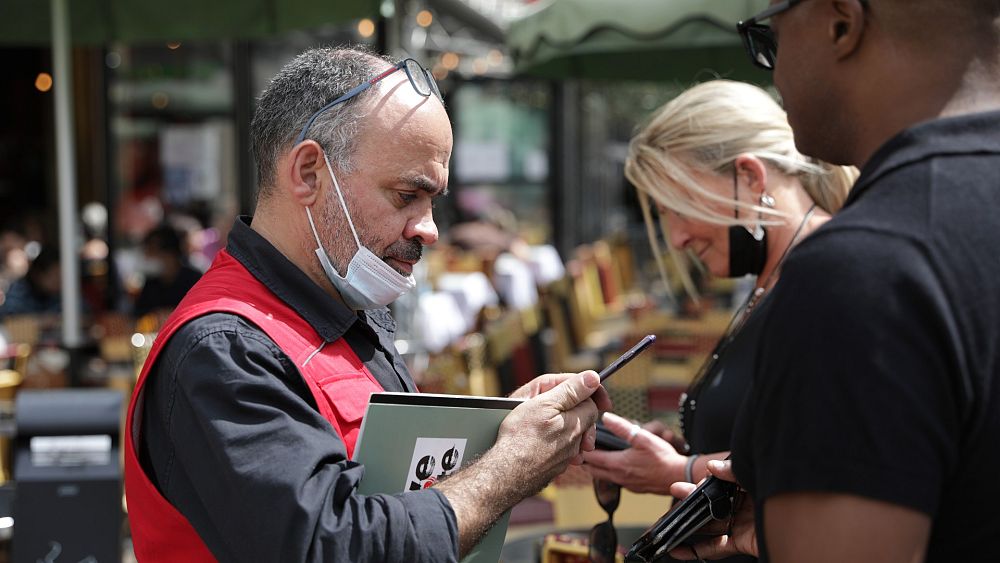 Agri-food businesses in France are worried about the impact the new COVID-19 green pass could have on their livelihoods. Since yesterday, the pass is mandatory in bars and restaurants, as well as in other indoor places.

The health pass – which certifies that its holder has either been vaccinated, tested negative in the last 72 hours or cured of the virus in the last six months – was launched in France on July 21.

At that time, it was only required by cultural and recreational places with a capacity of more than 50 people. But it is now compulsory to go to bars, restaurants, health centers and to use long-distance public transport.

Didier Chenet, president of the GNI-HCR union of independent hotel companies, said on Sunday that the application of the law will be “very complicated”. He told RTL radio the uncertainty of professionals on how to manage “the behavior of a recalcitrant customer refused entry to the restaurant”, how to control people on the terrace and the financial impact that this will have.

â€œThe film professionals say they have a very slight loss of activity, will it be the same for us? This is the question we are asking ourselves. And finally, the big difficulty for us will be the controls on [restaurant] terraces: it’s mission impossible, “he said.

â€œThe terraces are open spaces, customers come and even before entering the restaurant (…) they sit down, take a table and what do we do? We check them and tell the customer who does not have a valid health card to leave. It’s going to be very, very complicated, “he said.

Another union for hotel companies, UMIH, estimates that “the health pass could lead to a 15 to 20% drop in attendance”.

Meanwhile, Transport Minister Jean-Baptiste Djebbari said on Monday that passengers around a quarter of long-distance train services will have their health cards checked. Some passes will also be checked on domestic flights and long-distance buses.

The controls “will be massive, they will not be systematic because we have 400,000 passengers a day on the trains, just in the trains, and it is therefore quite impossible to control everyone at all points”, Djebbari told reporters. during a morning visit to the station. Gare de Lyon in Paris.

“Things are going well,” he added, citing the case of a train of several hundred passengers in which three people were denied boarding.

“Two were referred to a friendly pharmacy that could do the tests and people were able to exchange their tickets and take a train later. The third person chose to have the ticket refunded,” he said.

Anyone caught breaking the rules will be fined a minimum of â‚¬ 135 and a maximum of â‚¬ 750. Three offenses within six months can result in a fine of up to â‚¬ 3,750 and a six-month prison sentence.

Government spokesman Gabriel Attal conceded Monday that the extension of the health pass is an “additional constraint” but said it was necessary due to the deteriorating health situation.

According to Public Health France, the country’s intensive care units received 1,510 patients on Saturday, against 1,099 a week ago. The number of hospital admissions rose to 8,425 from 8,368 on Friday.

“The pass and the progress in immunization should allow us to avoid further curfews and closures,” Attal added.

More … than 66% of the French population has received at least one dose of the vaccine and 55.2% are fully vaccinated.