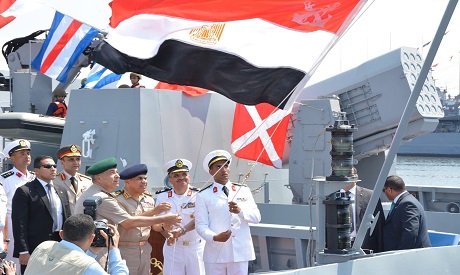 The Egyptian navy on Friday celebrated the arrival of the new multi-purpose frigate FREMM at the Ras El-Teen naval base in Alexandria, a day after its arrival, said the spokesman for the Egyptian armed forces, Brigadier General Mohamed Samir. on his Facebook page.

Admiral Osama Rabie, commander of the Egyptian Navy, said during the celebration that the new frigate is considered the first of its kind in the Middle East and one of the newest and most advanced productions in the world.

The new frigate will be present at the inauguration of the new Suez Canal on August 6, according to Admiral Rabie.

The celebration was attended by the Egyptian Minister of Defense, Colonel General Sedky Sobhi, the Egyptian Chief of Staff, Lieutenant General Mahmoud Hegazy, the French Military AttachÃ© in Cairo, as well as the Governor of Alexandria. .

The multipurpose frigate weighs nearly 2,000 tons and is 142 meters long.

In February, Egypt and France signed an agreement for Cairo to purchase 24 French Rafale jet fighters, the naval frigate and related military equipment. The deal is worth more than 5 billion euros ($ 5.70 billion) in total.

When Egypt signed the contract, it became the first export customer for combat aircraft, built by Dassault Aviation.

On July 20, Egypt officially received the first three Rafales from France during a ceremony at a French military base.